Difficulty sleeping, moments when nothing can be done but breaking down to sob and cry, emotions raging out of control, and to make it even worse, your pants no longer fit the way they used to. If you just read that and know what I’m talking about, the lows and highs of a hormone imbalance might be a problem in your life.

A hormonal imbalance happens when the hormone level is fluctuating instead of remaining where it is normally at with your body. Every cell playing a role in the makeup of your body is affected by these vital compounds. This means, with just a minimal imbalance to your hormones, your entire body can go through a rippling effect.

CBD oil is an active compound that is derived from the cannabis plant. While there seems to be a new reason for using a CBD oil product every week, not enough people realize CBD oil can help those suffering from a hormone imbalance. Both balance and harmony can be restored to our hormones, easing the common symptoms that make everyday life a complete mess.

Can hormone imbalances really be relieved with a CBD product? If yes, how exactly does the work, what’s the process? We will go over what Dr. Julie Molthe, a scientific advisor and cannabinoid specialist, has to say on the subject as this article progresses. First, let’s take a look at the better look at our hormones. 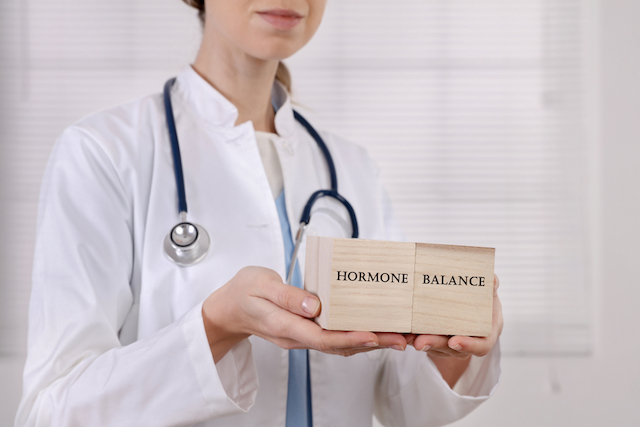 Each of us has chemical messengers throughout our bodies known as hormones. These molecules are produced by the endocrine glands in microscopic amounts. These major glands in the endocrine system are:

Our hormones will make their way into the bloodstream and then travel to particular receptor sites in the tissues and organs where they lead to changes taking place. Hormones are important for every process our body has including:

While our hormones are very small, they are significant and play a significant role in daily life. With just the slightest deficiency or excess of a specific hormone and a person could be led to going through major health issues.

What Exactly is Hormone Imbalance?

Our hormones will fluctuate and naturally shift during the day, during a menstrual cycle, throughout puberty, menopause, and while a woman is pregnant. Each of these changes can normally be predicted, meaning our body is functioning the way it is supposed to.

That being said, there are other hormone imbalances that will happen if just one endocrine gland isn’t being productive enough, producing too much, or if the gland stops producing hormones altogether. These imbalances can be triggered by certain health conditions such as:

Other environmental and lifestyle factors also have the ability to create an influence on our hormone balance, such as a high level of stress, being overweight, consumption of high-level soy products, and taking steroids.

Symptoms and Signs of a Hormone Imbalance

Both anecdotal evidence and medical studies conclude that CBD oil can play a role in alleviating the symptoms felt of a hormone imbalance. There is a wide range of proven benefits for the health provided by using CBD oil and there is still a ton of research and study taking place.

The Endocannabinoid System and CBD Oil

The ECS, endocannabinoid system, can be complicated and difficult to understand. Still, after all the research and study that has already been completed, doctors aren’t able to fully understand and grasp the most minute details of the system. That being said, science has been able to show us there are three components: CB1 and CB2 receptors, endocannabinoids, and enzymes.

The primary focus of this system is controlling how our body releases the neurotransmitters affecting the impulses of our nerves. The endocannabinoid system can also be involved with regulating:

CBD oil is one of the primary compounds that are derived from the Cannabis sativa plant. Using CBD oil for medical reasons is constantly growing in popularity. Because of the fact you cannot get high from consuming CBD oil, regardless of how much is used, more and more people are turning to CBD products for health and wellness benefits. Your endocannabinoids are boosted with the use of CBD oil, allowing the endocannabinoid system to perform more effectively.

With what we have been able to learn from science, we know that there is a link between the endocrine process and the endocannabinoid system. Science has shown the ECS plays a role in maintaining the body’s balance. This ensures the body acts within a small range of conditions to operate within.

The endocannabinoid system regulates stress, memory, our mood, bone growth, fertility, immune function, pain, as well as several other things. CBD oil will interact with the ECS and several other receptors throughout the body. CBD oil can influence primary hormones such as cortisol, melatonin, and insulin.

Insulin, our essential hormone, is produced by the pancreas. If things aren’t balanced here, obesity, heart disease, as well as diabetes can be a result. Dr. Moltke says, “We have long known that marijuana consumption seems to be related to reduced blood sugar levels.” She has outlined the clinical experience and studies that demonstrate that when medical cannabis is used by diabetics, they can lower the amount of insulin or diabetic medication they use because their blood glucose is already being lowered by the cannabis.

While additional research and study needs to be completed before we can better understand CBD’s effect on insulin, we have learned CBD oil by itself will affect insulin or blood sugar. It more than likely doesn’t directly affect these measures, but, because of the anti-inflammatory properties might be very valuable for type 2 diabetes. This condition associates with chronic inflammation in our body due to increased blood sugar levels.

Stress produces a negative effect on our mental state, blood pressure, and overall health. Along with adrenaline, cortisol is involved with managing how we respond to stress. It’s safe to say, cortisol is needed to survive living during stressful times. It’s in charge of determining our flight or fight responses.

When too much cortisol is produced, you can experience symptoms such as mood swings, gaining weight, as well as an increase in anxiety. There has been a study showing CBD can lower the cortisol level. This hormone is associated with the way we feel and respond to chronic stress.

When you aren’t getting enough sleep, your health will suffer negative consequences. The pineal gland produces melatonin that is responsible for our circadian rhythm. To put it simply, when you go to sleep and then wake up, your energy levels are managed by melatonin. For the majority of us, this is highest at night and at its lowest during the morning.

The endocannabinoid system plays a role in our sleeping patterns. There’s been a study completed that found the ECS activates CB1 receptors, affecting the stability of our sleep, how quickly we are able to fall asleep, and the increase of the amount of melatonin being produced.

The symptoms of a woman’s hormone fluctuations, as well as those that happen with menopause and puberty, can be relieved with the use of CBD oil.

There are plenty of women who experience depression and anxiety both during menopause and their menstrual cycle. Progesterone and estrogen produce an effect on the level of serotonin, which is known as the happy chemical that influences the mood being felt.

A study has been completed showing that CBD oil can activate serotonin receptors. This produced both an antidepressant and anti-anxiety effects.

During a woman’s regular cycle, the uterine contractions that will happen during the cycle become even more intense. This creates food transit throughout the digestive system to be slowed down. This will lead to both bloating and constipation. The drops in progesterone and estrogen before a woman’s period will also create water retention.

The digestive system has cannabinoid receptors. Research has confirmed the ECS plays a part in physiologically controlling colonic motility. CBD oil can relieve the issues with bloating by increasing our gut motility.

Several women will find the pain that associates with menstruation debilitating. Still, other women will simply feel a little uncomfortable during their periods. Regardless of where you might stand, there are several studies showing that CBD oil can work to relax cramping muscles and relieve pain.

CBD oil has been recognized by many for producing vascular and muscle-relaxing effects. This will also lead to fewer and less intense cramps during a woman’s period. The way that the ECS and CBD oil work is more than complicated. There is still a lot we need to learn. That being said, there is already plenty of evidence suggesting that CBD oil might help with relieving the symptoms of hormone imbalance.