Home Use Cases What Are Flavonoids In Cannabis?

Cannabis is a plant that consists of many bioactive compounds, often known as cannabinoids and even terpenes. However, apart from these, there are other compounds known as flavonoids, which are about 10% of all the identified compounds in cannabis. Flavonoids are nutrient families widely present in various plant species such as fruits, vegetables, herbs, etc. They promote growth and impart the essential nutrients that aid in cell cycle progression. They also help defend the plants from bacterial parasites, insects, sun damage, and more. 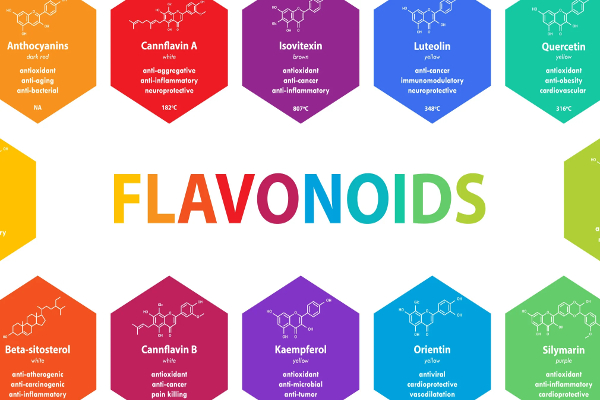 There are 20 known varieties of flavonoids in the cannabis plant known as the cannaflavins. In addition to aiding the growth and development of the plants, flavonoids are also responsible for the flavor, aroma, and pigmentation in various fruits and vegetables.

Flavonoid compounds play various roles for the elements they are present in. Various features of flavonoids are as follows;

They exist widely in nature!

Flavonoid borrows its name from the Latin word flavus, denoting the yellow-colored pigment present in flowers. Their prime role is to cause color pigmentation in various flowers and plant species.

These polyphenolic compounds function as secondary metabolites in varieties of fungi and other plant species. Several edible vegetables and fruits characterized by bright colors instead of green pigmentation are due to the presence of flavonoids in them. There are over 6000 types of flavonoids discovered, all of which have their unique functions.

They provide flavor to cannabis!

They are pharmacologically active.

Apart from being the reason for the coloring, flavor, and aroma in plants, research has also found that the cannaflavins present in cannabis are full of medicinal benefits. The flavonoid quercetin is known for its antioxidant and anti-fungal properties. Catechins, widely found in tea and cocoa, are beneficial for cardiovascular health.

Cannaflavin A is found to be the most pharmacologically active flavonoid and is said to be much more effective than Aspirin in treating inflammation. A few of the other active flavonoids discovered in the cannabis plant are Silymarin, Kaempferol, Orientin, and Quercetin. Multiple studies believe these flavonoids possess antioxidant, anti-inflammatory, and anti-fungal properties.

They have a synergistic effect!

How do flavonoids work?

Flavonoids are rich in medicinal and therapeutic properties. They interact with the chemical receptors through the endocannabinoid system and promote antioxidant, anti-inflammatory, and antibacterial activities in the system.

Cannabinoids in combination with flavonoids, terpenes, and other compounds result in the Entourage Effect, which is the prime cause of different varieties of cannabis, producing different therapeutic effects. These compounds are present in different amounts in different strains of the plant. Hence, they are suitable for various functions based on the properties of that particular strain.

Different Types of Cannabis Flavonoids and their Benefits

Apigenin is vastly present in food items such as;

Apigenin traditionally found applications as wool dyes. However, they are widely known for their muscle-soothing and relaxing properties. The chamomile flower has 68% apigenin responsible for its flavor and color. Apigenin interacts with the GABA receptors, promotes good sleep, and reduces the symptoms of anxiety and depression. It also possesses many antibacterial and anti-inflammatory benefits.

Quercetin is the most commonly found flavonoid component in various plants, cannabis and;

They are also present in several other bright-colored fruits and vegetables. Apart from acting as the pigments that grant color to plants and vegetables, they also have many health benefits by eliminating free radicals and reducing inflammation. They are also rich in antioxidants and possess anti-viral, anti-fungal, and anti-bacterial properties.

This flavonoid is abundantly present in;

They are highly present in saffron and capers. Rose petals get their bright color due to the presence of Kaempferol. Scientists also believe that this flavonoid might help treat cancer due to its properties in fighting inflammation, creating new blood cells, and targeting metastasis.

How to reap the complete benefits of Flavonoids

If one is interested in deriving the maximum benefits of Flavonoids, They can consume cannabis. Smoking can be a faster method, but the process might burn many flavonoids. Taking them as tinctures can help maximize the benefits of flavonoids in cannabis, but it depends on the preparation of the tincture too.

While there are a plethora of known methods and benefits of consuming flavonoids, research in the field is still limited. However, new research and studies are being conducted worldwide to better understand the role of flavonoids and cannabis in promoting holistic health and wellness.

How To Use CBD For Gym? Or CBD For The Gym: The Best CBD For Workouts