Home Use Cases Will CBD Help with My Depression?

In the last few years, there has been a significant increase in interest in how CBD can be used against mental health illness. This includes, but isn’t limited to, using CBD to battle depression. Cannabidiol, the less common name for CBD, is a chemical compound that is extracted from the Cannabis plant. Yes, this means it comes from hemp.

There are over 80 different compounds that can be found in cannabis. These compounds are known as cannabinoids in both the science and medical fields. For the over 80 cannabinoids deriving from cannabis, by far, two of the most popular are THC and CBD. THC is well known as the psychoactive substance in marijuana that produces the buzz or high people feel when smoking weed.

On the other hand, CBD, because it is purported, has numerous benefits for health and wellness without altering the user’s state of mind without a high or buzz feeling. There has already been plenty of study and research completed showing CBD produces effects that are antidepressant-like. This means, there is a ton of promise concerning CBD’s ability to alleviate the symptoms one may experience with depression. 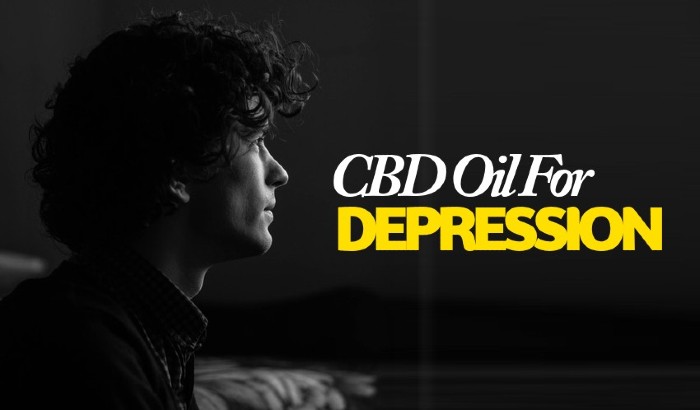 You don’t have to search very hard to find claims people are willing to make of how CBD is helping them with their depression and other mental health issues. That being said, you need to keep in mind there are still plenty of limits with this specific research. This doesn’t mean CBD won’t help. It simply means there is still a lot needing to be scientifically proven.

Yes, plenty of studies have already been completed. Still, there are many other studies with important limitations. In order to fully understand exactly how CBD oil benefits those suffering from depression, there is still a ton we need to learn. For example, there are several completed studies demonstrating CBD can be beneficial with antidepressant effects. But the majority of these studies have only gone as far as testing on animals.

There has also been plenty of research completed suggesting CBD oil can help by alleviating depression symptoms through interaction among serotonin receptors found in our brains. This is a neurotransmitter that plays a significant part in the body’s functions, including how our moods are regulated. Using a CBD product could play a role in producing happier, more joyful feelings beneficial to our mental health. Research also shows depression’s onset is implicated with an increase in the serotonin level. This is how many antidepressant medications work.

In 2018, there was a study published suggesting the serotonin level may not be increased with cannabidiol. Instead, it seems to work by producing an influence on how the serotonin already present causes the brain to respond. There is another study that shows there was a clear anti-stress effect with CBD oil. This could play a part in the reduction of stress that leads to feeling depressed or anxious.

How CBD is taken

There are several different methods in which cannabidiol is available. That being said, if you are using CBD oil to experience effects similar to what you would receive with an antidepressant, you will want to use a method where the CBD is ingested. With CBD products, oils can be taken underneath the tongue, you can use a capsule or gelcap, there are even CBD sprays which can be used orally. Also, there is always the option of adding CBD oil to your food or drink and there are many premeasured edibles to choose from.

You can also use CBD oil as a lotion, cream, salve, or balm. That being said, in order to get the effects that will best help with depression, anxiety, and other mental health illnesses, you want to make sure you are using a method that is taken orally. Also, for those who use vaping devices, there are plenty of e-juices now available with pre-measured CBD oil.

On top of this, you will need to know the differences between CBD isolate, broad-spectrum, and full-spectrum products. CBD isolate products only include CBD in its purest form. Broad-spectrum products also include other cannabinoids extracted from the plant, but THC will not be included. With full-spectrum CBD products, THC will be included in the mix. That being said, the THC level will be under the federally legal percentage.

What are the CBD side effects?

According to the majority of the research and study that has been completed, there are very few negative side effects commonly experienced with CBD oil. Of the ones people have shared experiencing, most of them go away once the body gets used to the product. Also, the majority of side effects that have been reported were the result of starting with too high of a dose. Once corrections were made to the amount being taken, the negative side effects were no longer an issue. All of this being said, no two bodies are alike. Some of the most common side effects people had included:

The World Health Organization reports there is evidence available suggesting overall, CBD oil is relatively safe for use. Again, there is still a lot of study and research needing to be completed when it comes to the long-term effects produced by CBD oil. This doesn’t exactly mean something negative. It means they have not been researching CBD oil long enough to learn how people are affected after a length of time. The lack of regulation by the FDA is one of the greatest concerns faced by consumers as of now.

While it is federally legal to use CBD products in the United States, because they have been marketed as a supplement, these products aren’t subject to serious regulation. This means any company or brand with a fancy printer can say anything they want about the product they are marketing and promoting. Unless the product you are purchasing has been tested by an independent third-party, there is no way to be absolutely positive you are getting what the product’s label says.

There has been a study completed that found over 65 percent of products with CBD oil being sold online were advertised with misleading information. The most common situation with the information has the product contained a higher level of THC than the brand was claiming. Several products are claiming to be THC free while actually containing a level above the legal limit. This would lead an unsuspecting consumer to test positive for THC. Not only could this be significant to someone’s job or legal status, but it could also create someone having an altered state of mind that wasn’t anticipating this effect.

There’s another completed study that determined there can be dangerous medications and chemicals found in some CBD products that have the potential of being dangerous. CBD products with this type of contamination could potentially lead consumers to unwanted drug interactions and allergic reactions.

Taking all of this information in, how exactly does CBD oil compare to antidepressants traditionally prescribed by doctors? Due to the lack of completed study and research on CBD oil, it is extremely difficult to even try and promote any true comparisons. That being said, there is a study that was completed on animals suggesting a consumer could experience many benefits by using a CBD product over traditional antidepressant medications.

In 2018, Molecular Neurobiology published a completed study suggesting CBD oil could be used with the promise of fast-acting antidepressant results. With traditional medications prescribed by a doctor, the patient will normally wait up to several weeks before they experience any significant changes in how they feel. With testing that was completed on rats, the same results happened much faster. Also, the number of negative side effects was significantly lower with CBD oil compared to traditional antidepressants.

To wrap things up, when it comes to using CBD oil instead of traditional antidepressants, there is still a lot of research and testing that needs to be completed. While plenty of consumers are quick to report the benefits they have experienced for their mental health with the use of CBD, there’s not enough scientific proof for CBD to be recommended medically for treating depression.

If you are one of the millions of people suffering from depression, especially since the start of COVID, it is detrimental that you have a discussion with a mental health professional or a doctor. Over a period of time, there is always a high risk of depression worsening instead of getting better. This is especially true without medical advice. There are several options available when it comes to treatment and medication. Also, if you make the decision to go the CBD oil route, you still need to have a conversation with a doctor.

Benefits of CBD without THC