Home Vaping Why Does Vaping Hurt My Throat?

If you’ve recently made the switch from conventional cigarettes to a vaping product, or are considering making the switch, there’s a lot to keep in mind concerning health and side effects. Yes, according to all of the research and data that’s been collected to this point, e-cigarettes and vaping products are much healthier for someone than cigarettes with tobacco are. 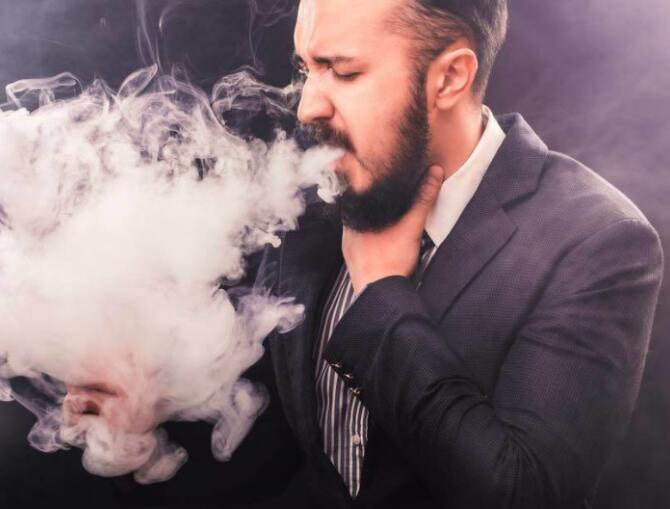 That being said, there’s plenty for you to keep in mind. These products haven’t been on the market to properly research and study their long-term effects. Up to this point, concerning how your body will or won’t be affected after years of vaping is simply a bunch of opinions and theories.

While there are plenty of people who vape who haven’t experienced any kind of threatening illnesses, there are a few side effects that have been commonly experienced. For the most part, these effects were minor and many of them required a simple answer to be avoided.

In this article, we will address a few of these more common side effects, specifically experiencing a sore throat after vaping. We’ll look at a few of the effects people experience the most and how you can go about avoiding them. By far, the most common effect is having a sore throat, so we’ll touch on that the most. First, we’ll start with a couple of other common effects people have had.

Along with developing a sore throat, one of the most common effects people new to vaping products experience is having a dry mouth. Both vegetable glycerin and propylene glycol are base ingredients found in the liquid used in vaping products. While a dry mouth is experienced more with liquids containing a higher percentage of PG, a liquid that is 100 percent VG will also create a “dry mouth” feeling.

Because both VG and PG are humectants, they absorb water. Every time you take a hit from the vaporizer, all of the moisture in your mouth is absorbed in the vapor. The simple fix for this is drinking more water. Especially if you’re brand new to vaping, you need to make sure the amount of water you drink is increased. If you’re drinking plenty of water and still experiencing a dry mouth when you vape, there are oral hydration rinses you can buy that will help.

It’s not uncommon to get headaches when you first begin vaping, especially if you’re someone who recently made the switch from smoking cigarettes. Yes, there are plenty of liquids that contain nicotine. Still, if you’ve been smoking conventional cigarettes, there are plenty of other additives, plus tobacco, you no longer get with vaping. These other additives produce a physiological effect on smokers. If you have a cigarette smoking habit you suddenly give up, there’s actually a good chance you’re going to experience some headaches, regardless if you’re vaping or not.

If you experience headaches while vaping and you haven’t switched from smoking cigarettes, there’s a chance you simply aren’t staying hydrated enough. When you go through dehydration, headaches can be a serious symptom. Like we’ve previously stated if you’re new to using vaping products, drinking more water needs to be a part of your routine. I’m not saying you need to take a drink following every drag from your vaporizer. But, you need to regularly be drinking water throughout the day.

If you’re brand new to vaping, especially if you’ve never smoked, you can expect a dizzy feeling of being light-headed. This is very similar to what’s experienced to someone who first begins smoking cigarettes. Similar to smoking, these effects with vaping will be less and less as you use vaping products more. You need to realize, this isn’t a feeling that comes with vaping. This feeling is caused by nicotine.

With vaping, you can control the level of nicotine being used in the liquid you vape. When first getting started, it’s highly recommended you use liquids with as low of a nicotine level as possible. Also, simply not using your vape as much will play a part in lowering the amount of nicotine intake. If you’re experiencing feelings of dizziness or being light-headed, try taking half the number of hits you’ve been taking while vaping. Between that and a lower level of nicotine in the liquid you’re using, the feeling should start happening less and less as your body gets used to vaping.

Similar to the other effects we’ve mentioned, more often than not, if you are feeling nauseous while vaping or shortly after, it’s more than likely due to the level of nicotine in the liquid you’re using. If you are someone who has ever tried to quit smoking cigarettes with the aid of gum or a patch, you know nicotine causes these issues, regardless if you’re using a vaping product.

If you are experiencing nausea while vaping and you don’t think it’s a result of the nicotine level, you are using a liquid you shouldn’t be using. Either cut back on the amount of the liquid or use a different brand or flavor altogether. That being said, similar to the effect of dizziness and feeling light-headed, this effect could also start going away with time.

Regardless of the seriousness of the long-term effects of using vaping products, this is putting something into your system that naturally isn’t there. More often than not, as your body gets used to this, effects such as these no longer happen.

If you’re using a cinnamon flavor, anything referred to as being “fiery,” cinnamaldehyde, a commonly used chemical for flavoring, is usually involved. This specific chemical has typically been part of the reasoning concerning chest pain with vaping.

If this is something you are experiencing, don’t hesitate to change everything. Switch the products and brands you use, decrease the amount of power being used by your device, use a different coil or atomizer, use different flavors, change whatever you need to change. If you still experience chest pain with vaping after the changes, make an appointment to see a doctor.

Why does my throat hurt when I vape?

As we mentioned at the beginning of this article, suffering from a sore throat is hands down the most common side effect for those who are new to vaping. To get started on this, there’s a secret you need to know. Vaping isn’t simply inhaling or sucking in as hard as you can. I don’t want to make too much of this, but in a sense, there’s an art form to it. Here are a few of the main reasons why someone would experience a sore throat with vaping, especially if it’s something new to you.

Many of the vaping products still require a cartomizer system. If this is true of the vaporizer you are using, you want to make sure your cartridges aren’t burning out. One of the quickest ways to develop a sore throat with vaping is by pulling on an empty cartridge. Make sure you are filling the cartridge with liquid or replacing it regularly.

One of the two bases used in a vaping liquid is Propylene Glycol, or commonly referred to as PG. Because this base is not as thick, it gives the person vaping what is known as a nice throat hit. That being said, the rate of sensitivity is higher with PG, leading the user to have an unusually dry mouth, eventually leading to a sore throat.

We’ve already listed drinking plenty of water to avoid a few of the side effects with vaping. If you are using a liquid high in PG, this is even more of an issue. Again, if you’re new to vaping, make sure you are drinking plenty of water. This simple act alone does more than anything else to prevent the majority of the effects we have discussed. As your system gets more and more used to vaping, you won’t need to be drinking as much water. That being said, having an extra bottle around isn’t ever a bad thing.

If you have been vaping for a while, you know exactly what a dry hit is. If you haven’t, don’t worry, you will find out soon enough. If you have gone for a vape and received a burning sting that feels hot in your throat, you have taken a dry hit. No, this isn’t exactly like having a sore throat. These dry hits normally won’t last very long. Still, if you are new to vaping products, you may experience this and believe you have a sore throat for the moment.

If you are one of the many people who quit smoking cigarettes and begin to use vaping products, there’s a chance you may experience what is known as cessation. This is simply a commonly used term for tobacco withdrawal after giving up cigarettes. Again, if this is something you experience, it isn’t because you are doing too much or too little of something. This is common for people who make the switch from traditional cigarettes to vaping products.

If you have experienced a sore throat as a result of anything we’ve listed, there are several things you can do. As said, drinking a lot of water helps. Also, try drinking a soothing tea or form of hard candy that lubricates your throat. More often than not, this is simply your body getting used to something new. These effects typically don’t last longer than a day or two.

Make adjustments to how you vape. Take smaller amounts, don’t use your vaporizer as often, and lowering the level of nicotine in the liquid you use never hurts anyone.

Related: Pros and Cons of Vaping