Home Vaping Is Vaping Bad for Your Heart

Vaping has gained a lot of attention recently as more than 2,600 users have been hospitalized due to vaping-related illness or injury, and 57 people have died. Vape advocates claimed that e-cigarettes were an alternative for smokers who wanted to quit smoking traditional cigarettes, but now it seems that this claim may not be valid.

Research has caught up over the last decade, painting a grim picture of their so-called benefits even compared to cigarettes. Some researchers claimed that they’re worse than cigarettes because they carry many of the same risks but are more easily marketed to young people. 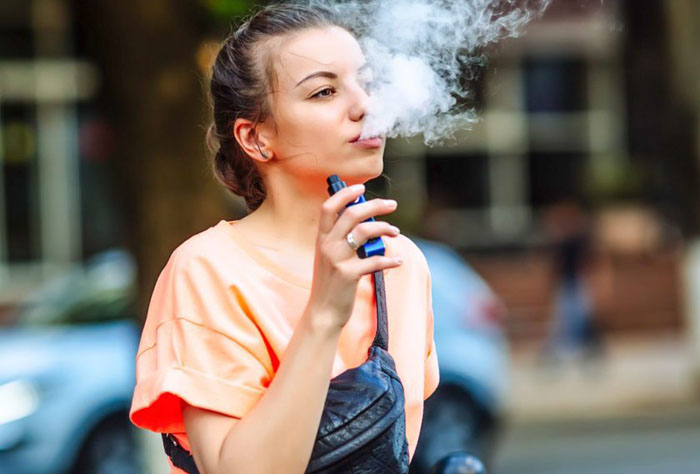 Vaping has been linked to many potential health issues ranging from the mouth, teeth, and gums down to your lungs. Your heart can also be affected as well as other parts of your body such as skin. Let’s break down four significant risks associated with them:

Regular cigarettes contain about 7,000 chemicals. They are toxic, and researchers continue to investigate what exactly is in e-cigarettes; however, one thing remains clear: they don’t have fewer toxins than regular cigarettes. Attention has been on one chemical, in particular, found in black-market vape liquids. Vitamin E acetate is often used as a thickening agent to make e-liquids for modified vaping products or those containing THC (the primary psychoactive ingredient in marijuana).

The Centers for Disease Control and Prevention (CDC) recently warned about an outbreak of lung injuries associated with e-cigarette products containing THC, dubbed EVALI. The CDC recommends avoiding all vape pens or mods that contain THC in their liquid mixture and purchasing devices from friends online sellers to avoid exposure to the chemical until more information is gathered on its effects on humans.

Vaping is Bad for the Lungs

E-cigarette vapor contains some harmful chemicals that lead to serious lung problems. These can include diacetyl, which has been linked to disease; formaldehyde, which could cause cancer; acrolein and benzene, both known carcinogens linked to other illnesses such as COPD or even lung cancer. Heavy metals like nickel, tin, or lead are also found in the e-cigarettes’ secondhand smoke.

Vaping has been linked to asthma and COPD, two conditions that are also more common among smokers.

Research suggests that vaping increases a person’s likelihood of developing these lung-related diseases. If this sounds familiar, it’s because smoking is known to cause similar problems; in fact, both vapers and smokers have higher rates of chronic obstructive pulmonary disease (COPD) than non-smokers do.

Although some studies show vaping can help people quit smoking cigarettes, this isn’t true for everyone. E-cigarettes have not received FDA approval as a stop smoking device. Recent research found that many who tried to switch from using cigarettes instead ended up continuing both habits.

What are the Effects of Vaping on Heart Health?

Increase the Risk of Heart attacks and other Diseases

New research from the American College of Cardiology reveals that people who vape may be more likely to suffer a heart attack, coronary artery disease, and depression.

Research has shown that vaping immediately stiffens and tightens your blood vessels, limiting the movement of oxygenated blood to other parts of the body. Vaping can also lead to coronary artery disease, circulatory problems like stroke or heart attack, and a higher risk of cardiovascular diseases. Although these numbers are significantly higher among traditional cigarette smokers, that doesn’t mean e-cigarette or vaping users don’t experience similar problems.

Damages the Lining of your Arteries

In a study released in November 2019, researchers from the University Medical Centre Mainz in Germany found that one vaping episode caused changes to 20 healthy cigarette smokers’ cardiovascular health.

The participants’ hearts beat faster, the stiffness of their arteries increased, and signs showed that their inner lining was not working correctly. This incident occurred after they inhaled only two puffs per minute for just 20 minutes. Researchers found that e-cigarette vapor damages the endothelium, which causes arteries to contract and relax, disrupting blood pressure and releasing clotting proteins, creating dangerous clots in vessels of vital organs like the brain. The endothelium is linked to several diseases, such as heart disease and stroke. Furthermore, stiffening the arteries can lead to dementia and increases your risk of having a stroke.

Decrease blood in the heart

The findings of the study, conducted by researchers from Cedars-Sinai Medical Center in Los Angeles suggest that e-cigarettes may be just as harmful as combustible cigarettes to a person’s heart. This study took a look at the effect of vaping and smoking on coronary vascular function in 20 healthy young adults. Researchers tested their blood flow to the heart both when they were not doing anything and during exercise, which simulated physical stressors. They found that there was no difference between those who used e-cigarettes or combustible cigarettes as far as health effects are concerned because they had similar changes in coronary vascular function after exposure.

Researchers found that a person’s blood flow decreased both when they inhaled and during the stress test after vaping. This suggests e-cigarette use interferes with the regulation of blood to the heart in cigarette smokers who had an increased rate of cardiac events while smoking compared to non-smokers or former smokers.

Electronic cigarettes emit an aerosol that consists of ultrafine particles in concentrations higher than traditional cigarette smoke. It could exacerbate asthma and constrict arteries which cause heart attacks. However, recent studies have shown vaping to be no better for your health than tobacco products, meaning it’s probably as dangerous if not more dangerous due to the high concentration levels of toxins emitted from e-cigarette fluids. The bottom line is vaping is bad for your heart in particular and health in general.