Home Use Cases Does CBD Help with Degenerative Disc Disease?

One hundred million Americans live with chronic pain, which is difficult to understand unless you feel the symptoms. Chronic back pain affects a large number of people, and there are many different ways it can be dealt with. The pain epidemic in America has been at the forefront of medical research and treatment options. There are safer therapy regimes such as physical therapy rather than traditional opioid drug therapies to combat chronic back pain. Uncontested signs of intervertebral disc (IVD) degeneration continue to plague 1 in 4 people, and there is still no sign of an effective treatment since IVD degeneration remains incurable. Chronic back pain patients may pop a pill, but it is unlikely that the treatment will provide an effective solution. Instead, chronic back pain sufferers should seek out remedies without addiction or overdose potentials. 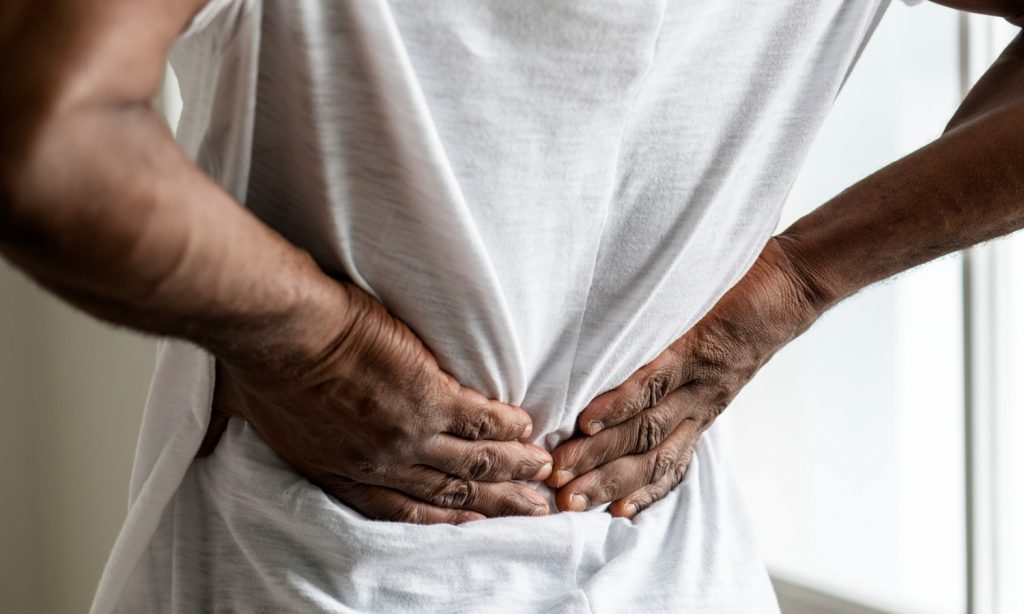 As we age, wear and tear on the vertebrae causes degeneration of one’s intervertebral disc (IVD). This can lead to chronic neck or back pain.

Older patients are at a higher risk for IVD degeneration because this type of tissue is susceptible to aging changes and other factors such as inflammation that may be due to injury or genetics. In addition, older individuals also have compromised nutritional intake from decreased dietary habits putting themselves in an even more vulnerable state where their body cannot sufficiently replenish itself with essential nutrients needed for cell division and maintenance like it did while they were younger.

CBD, a cannabinoid found in Cannabis sativa, has been shown to have therapeutic potential for intervertebral disc degeneration and may potentially help treat low back pain (LBP). In March 2015, the Department of Pharmacology at the Medical School of University of São Paulo conducted an animal study involving CBD on rats with induced disc lesions. They observed that treated animals had much lower numbers of apoptotic cells than those given vehicle treatments alone.

A study by Ph.D. candidate, Mason Silveira and his research team from the University of British Columbia’s (UBC) department of psychology, investigated whether using cannabinoids to treat disc injuries might worsen recovery time after surgery. Thich is a common belief in many medical communities that have been largely but not fully established through empirical evidence-based medicine or clinical trials on humans as opposed to lab animals like rats and mice who can’t effectively communicate symptoms they’re feeling with doctors making it difficult for doctors practicing conventional modern Western medicine sometimes referred to as allopathic treatment/practice due partly because patients often fail to follow their doctor’s advice leaving them susceptible for alternative types of complementary treatments such nonpharmacological therapies outside standard care options including acupuncture and chiropractic.

The rodents were induced with a condition that was similar to intervertebral disc (IVD) degeneration, and 29 of them showed MRI symptoms. Three different quantities of CBD have been tested on these rats: 10 mg/kg in two doses; 30mg/kg once daily; or 60mg/kg twice per day over four weeks. MRIs were taken before and after treatment ended for all subjects to ensure no changes occurred between the beginning and end states without any additional outside influence from an experimental drug like cannabinoids.

In the 15-day study, CBD was given in different dosages to rats. Rats with lower doses experienced little change from their induced damage, while those receiving higher doses showed significant improvements over time. The study concluded that “CBD revealed anti-degenerative effects when administered at high concentrations.”

How do you use CBD for Degenerative Disc Disease?

With no clinical trials as a foundation, nobody knows the optimal dose or method surrounding CBD and DDD. Research remains early and underdeveloped. In summary, an answer does not exist for this question yet.

No clear-cut answers exist around what dosage of CBD is best in treating DDD, with so little research being conducted on the subject currently. CBD remains an experimental way to tackle the symptoms of DDD. Some users find that CBD impacts their mental state and even physical symptoms, so why not use it? Always consult your doctor before doing so.

Which of the CBD Products should I use to treat Degenerative Disc Disease?

Choosing to use CBD oil can be a difficult decision. Many products exist on the market, but some are of low quality and unreliable due to their popularity. We highly suggest using only high-quality CBD oils that have been tested for purity to avoid any contamination or false information labeling by companies trying to capitalize off this emerging industry with defective goods.

Again, go for products that are extracted using Supercritical extraction. Supercritical CO₂ extraction has been a state-of-the art method for extracting phytochemicals since it captures all of the desired ones and leaves everything else behind. It also removes harmful solvent residue from other methods such as ethanol or hexane, which are common on nonorganic products that aren’t labeled specifically organic.

Finally, we recommend only buying lab-tested products. This way, you’ll know exactly what your bottle contains and it will be clean of contaminants as well as stay within the regulated limits for THC quantity.

DDD is a complex and controversial condition. We have learned that pain doesn’t equal tissue damage, as someone can feel pain even if they don’t have any physical disc degeneration or those without pains may suffer from significant amounts of nerve degradation within the discs themselves. Additionally, mental states such as fear of movement are commonly associated with DDD sufferers which only exacerbates their condition further.

Although there is still much to be done, the cannabinoid shows great promise as part of a holistic approach involving exercise and psychological intervention. Hopefully, future studies will further investigate CBD’s physiological effects on depression, its dosage levels required, in addition to other factors related to administration methods.