Home Use Cases The Entourage Effect And CBD

The Entourage Effect is a term used to depict the synergistic effect caused when multiple compounds present in the cannabis plant work together. These compounds first demonstrated the entourage effect in 1998. The discovery was by Professors Shimon Ben-Shabat and Raphael Mechoulam. They noticed that these compounds in combination managed to increase the activity of the receptors that interact with the Endocannabinoid System in the body, which plays a vital role in managing several functions such as regulating sleep, cell communication, immune response, memory power, and so on. 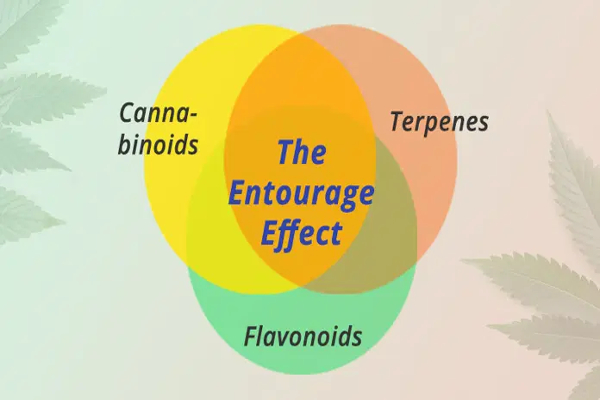 While the cannabis plant possesses over 120 different cannabinoids and several other compounds, the most popular ones are Cannabidiol (CBD) and tetrahydrocannabinol (THC). Although one can consume these compounds separately, research has shown that combining the two along with other small compounds such as terpenes or terpenoids is more effective.

Research by John McPartland and Ethan Russo in 2001 found further supporting evidence that cannabinoids and terpenes were found to increase pharmacological activities when taken together. Thus, these compounds widen the scope of their medicinal and therapeutic properties.

What are the other compounds present in Cannabis?

Apart from the popular CBD and THC as mentioned above, the following compounds were also found to be prime factors to the entourage effect-

These are compounds found in relatively smaller amounts, around 0.1mg to 7mg. Although these are known as minor cannabinoids, they can make a significant difference while causing the synergistic effect even at these levels.

Also known as the ‘stem cell’ cannabinoid, the compound is being researched for its antimicrobial properties.

Believed to regulate the sleep cycle, CBN is arrived at by converting CBD or aging THC. Research is underway to know more about its neuroprotective properties.

A lesser-known cannabinoid, CBC, is being studied for anti-inflammatory benefits and analgesic effects.

Terpenes are the chemical compounds found in almost every plant species on earth. The fragrance or aroma in plants is due to the presence of terpenes in them. Terpenes, when combined with cannabinoids play a prominent role in the entourage effect. It is said to have antifungal, anti-inflammatory, antiviral, anticancer, and anti-microbial properties.

Few types of Terpenes and their properties

Guaiol is known to possess antioxidant and antiparasitic effects.

Linalool is said to interact with the nervous system to help with depression and anxiety. This element from hemp and lavender is known to have antimicrobial properties.

This terpene is said to have anti-inflammatory effects. It is said to act as a cannabinoid while interacting with the CB2 receptors in the brain.

While cannabinoids, THC, and terpenes are popular compounds, there is another compound contributing equally to the entourage effect.

Flavonoids are phytonutrients widely present in flowers, vegetables, fruits, cannabis, and hemp. These compounds are the reason behind the color pigmentation in plants. Flavonoids found in cannabis and hemp are known as Cannaflavins. Research has found that flavonoids possess the following medicinal properties

Although CBD and THC may work better when taken together, one should take into consideration their goal in consuming cannabis before deciding on the ideal dosage. In the case of ongoing medical treatments, seeking advice from one’s healthcare provider to avoid drug interactions is recommended.

While studies have shown that when consumed together, CBD helps in minimizing the undesirable side effects of THC, such as anxiety, drowsiness, and hunger, both CBD and THC may cause their side effects. CBD may result in nausea, weight fluctuations, diarrhea, and THC being psychoactive may cause memory loss, fatigue, anxiety, and more in a few cases.

It is also prominent to know the legality of consuming such products under the relevant state laws.

How to take CBD and THC together?

For a beginner, it is suggested to start with small doses of about 5mg to 15 mg of CBD and 5mg of THC and gradually increase the dosage if needed. One must experiment with various methods, like gummies, topical application, tinctures, capsules, vaping, and more. One must decide the best fit. One can also consume them simultaneously or try taking them one after the other if that works best. However, due caution is essential in the case of THC vape products. Consult a physician immediately in case of any discomfort such as nausea, cough, fever, chest pain, etc.

If one has reservations against the effects of THC, a CBD isolate product can be the ideal choice in such a case since a full spectrum CBD product may contain other cannabinoids and up to 0.3% of THC.

How to select the right CBD product to achieve the entourage effect?

Although there are many CBD products available in the market that are made of hemp extracts, not all of them are equal in terms of quality and efficacy. Many factors such as the plant’s strain, the extraction process, purifying methods, and more play a role in determining how much of the minor compounds such as the flavonoids, terpenes, and other essential cannabinoids are retainable. Purchasing the right CBD product from an established company with relevant expertise in extraction methods is prominent to ensure ideal results.

Similarly, certain studies show that THC and CBD work well together. A 2011 study published in the British Journal of Pharmacology found that combining phytocannabinoids and terpenes may have a good effect on anxiety, inflammation, fungal infections, epilepsy, and more. However, more research is needed on the cannabis plant and the chemical composition of its various compounds to arrive at concrete conclusions regarding their medicinal properties and the entourage effect.

How To Use CBD For Gym? Or CBD For The Gym: The Best CBD For Workouts