Technically speaking, we don’t have evidence suggesting that smoking marijuana with a cold, cough, or if you have the flu would be inherently unsafe for the smoker. That being said, does this activity make sense for someone to do? If both your lungs and throat are already being irritated, there could always be additional discomfort created by smoking any substance. Smoking marijuana specifically produces both short and long-term effects on the lungs and respiratory functions.

Also, you may experience that your body will respond to marijuana differently if you are sick with one of the above-mentioned conditions. Both these illnesses, as well as smoking marijuana, can leave you feeling chills, fatigue, as well as headache. If you are sick, these feelings may feel much more intense than they normally would. You also will want to remember if you are smoking with a group or even just one another person, you may be sharing your illness if passing a bong, bowl, or a joint. 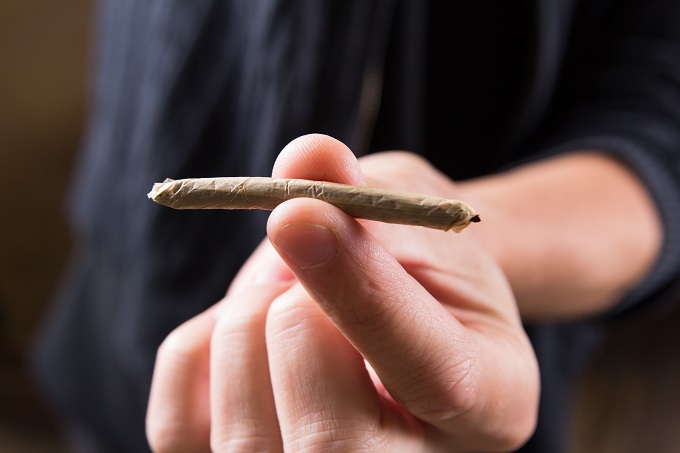 Will the symptoms be relieved by smoking Marijuana?

Currently, research isn’t available when it comes to smoking marijuana while the person is sick with the flu or a cold. There are still some pretty intense limitations when it comes to researching the use of marijuana for medicinal reasons. While there could be some benefit to smoking marijuana while a person is sick, science hasn’t had the opportunity to determine if any potential side effects would be more than the benefits.

There was a review completed in 2017 demonstrating significant evidence that the smoke produced by marijuana contains properties that are inflammatory. When it comes to having the flu or a cold, inflammation plays a role in a few symptoms including nasal passageways becoming swollen, sore throat, and having a fever.

The anti-inflammatory properties of marijuana could aid in relieving a few symptoms. It simply can’t be scientifically proven at this point due to the lack of completed research. This is the only way the exact benefits will be completely understood.

The same review from 2017 also reached the conclusion marijuana is an effective means of treatment for adults suffering from chronic pain. This chronic pain is ongoing. It is not the same as acute ache and pain created by the flu or a cold. That being said, there is a possibility smoking marijuana could be a help with relieving the pain that associates with a short-term illness such as the flu or a cold.

There was a study completed researching cannabis. It is believed THC, the active ingredient in marijuana is able to help a person get a higher quality of sleep on a short-term basis. With this information, smoking marijuana could help the person who is sick with a cold or the flu get a better night of sleep and rest. This being said, with long-term marijuana use, a tolerance is built concerning the effects that induce sleep. This means, if you are someone who regularly smokes marijuana, you probably won’t get as much help when it comes to getting a better night of sleep.

Can marijuana be used with OTC medications?

While there isn’t any talk being taken too seriously, when cold and flu medications that are purchased over the counter are mixed with marijuana, something like NyQuil, drowsiness can be intensified, altering cognitive functions. There is a good chance the person could have difficulties with making decisions and concentrating.

Keep in mind, there is yet to be serious research and study completed on someone smoking marijuana while being sick with the flu, a cold, or a cough. Plus, there is very limited data available on using marijuana for medicinal reasons.

There is, however, evidence provided from users stating smoking marijuana leads to experiencing the following side effects, but the lack of completed research limits the list.

Based on the review completed in 2017, the long-term smoking of marijuana can be associated with both excessive phlegms being produced as well as a chronic cough. If you are feeling ill due to the flu, a cough, or a cold, smoking marijuana can always cause your respiratory symptoms to become even worse. This is the result of the airways and throat being irritated by the smoke produced by marijuana.

If you consume marijuana through another method such as using a vaping device, the respiratory system isn’t affected the same way.

With both ingesting and inhaling marijuana, dizziness is a side effect that is commonly experienced. With using cannabis, there can be a sudden drop in the person’s blood pressure, leaving them feeling light-headed or faint. If an illness has left you already feeling dizzy or weak, smoking marijuana will more than likely make these feelings even more intense. If you smoke marijuana regularly, a simple decrease in how much you use may be able to lower the intensity of the dizziness you feel.

Both ingesting and inhaling cannabis will activate cannabinoid receptors throughout the gastrointestinal system. There are several different effects that could result from this, including but not limited to inflammation and pain throughout the stomach being felt. Cannabinoid hyperemesis syndrome is a condition that is rare but has been linked to long-term use of cannabis. This creates nausea, vomiting, and severe pain in the stomach.

Smoking marijuana could always make stomach symptoms created by the flu or a cold even worse. This is especially true for smokers who experience any stomach pain whatsoever while smoking marijuana. If you are willing to lower the amount you are smoking, you may be able to limit the amount of pain you experience.

Are vaping and smoking the same thing?

While inhalation is involved with both vaping and smoking, there is a huge difference between the two. When marijuana is being smoked, the plant is burned the smoke is what is being inhaled. With vaping, the plant is heated, creating a vapor that is then inhaled. While this may not seem like a significant difference, there is a different effect created on the lungs.

Different than smoking, when using a vaping device, you won’t experience side effects such as a chronic cough, according to a review that was completed in 2015. That being said, the same review concluded there are only modest advantages to vaping marijuana instead of smoking it.

Scientifically, it isn’t exactly bad for you to smoke marijuana while you are sick with a cold, cough, or the flu. This is especially true if you are someone who smokes marijuana on a regular basis. That being said, this could make the effects of a sore throat or cough worse than they normally would have been. If smoking marijuana while you are sick produces any kind of chest pain, produces a high fever, or makes it difficult to breathe, you need to see a doctor.

You will want to keep your doctor informed if a herbal supplement or recreational drugs is a part of your normal routine. They will be able to assist you in making any informed decisions regarding your health, as well as monitor any complications you could experience as the result of use.