Home Vaping Side Effects of Vaping

While many people are growing tired of hearing the answer, the response most commonly given is there’s simply too much that is unknown. These products haven’t even been on the market for 20 years. Because of this, it’s impossible to know the long term effects vaping will have on a person. On top of this, while there may be effects people have in common, each person is going to be affected differently, based on their body and the flavor of liquid being used. There’s a lot of small details that need to be studied. 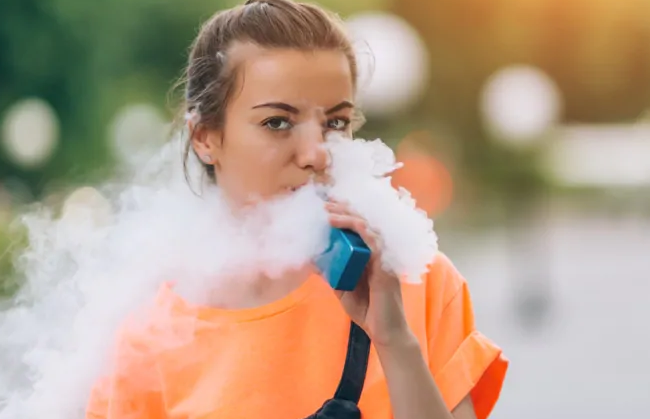 It’s easy to understand there’s going to be two types of information and studies available. On one side of the table, we have the manufacturer of these products wanting to address a few concerns that show they are doing something without losing business. We also have people on the other side wanting these issues to disappear altogether with the products being taken off the market.

While one side may be unwilling, to tell the truth about everything they know due to fear of losing business, the other side has reason to exaggerate the issues, hoping to create enough fear that people, especially the younger crowd, will stop using the products altogether. Both sides have a justifiable reason for taking things to the extreme one way or the other. This can be frustrating for those simply wanting to know the risks that come with using a vape product.

Our goal is to provide you with the facts we have been able to learn through the limited study and research that has already been completed.

Basic Research and Side Effects

Many people are unaware of just how long vaping and e-cigarettes have been around. While there’s plenty of history involved, the growth in popularity is pretty new. It hasn’t been until recently that we’ve had a reason to study and research the long-term effects of these products. Vaping was always linked to other behaviors that could become habit-forming such as a dependency of tanning or addiction to the internet. Sure, they were unhealthy, but it took a while until the right people decided to research and studies needed to be done.

That being said, if you know how and where to look, plenty of studies have been completed on vaping. There has been researched completed worldwide through surveys providing both negative and beneficial effects on people who vape.

There has been plenty of positive users have mentioned in regards to their memory, emotional state, even their sexual performance has been said to improve as a result of using e-cigarettes or vaping products. The use of these products has also led to negative effects such as both a sore and dry mouth, inflammation of the tongue, chest pain, problems breathing, and a headache or dizziness.

Still, further study has shown the effects on a person’s lungs can be just as severe from using vaping products as they are from smoking cigarettes. According to the data, many of the side effects that are more adverse may resolve partially or entirely over a longer period of time. This is determined by factors such as how much of a product was used and for how long by the individual.

The body’s resistance to vapor intake and side effects

Anytime a new substance is introduced to the body that a person is not used to, there are going to be side effects. This is true of any substance, regardless if it’s simply a chemical being touched, ingested, or inhaled. This is no different from the liquids used in vaping products. However, you can find side effects on the body that come along with eating some of the safest foods you can find.

Nicotine, flavoring, and the base are the three significant components of these liquids. These are either substances coming through a chemical process or a chemical themselves. Because of this, there will be side effects in one form or another. It also depends on whether the user is vaping a liquid containing nicotine. If nicotine is included, there will be factors such as did the person smoke cigarettes before or is this the first time their body has been introduced to nicotine?

The majority of the side effects users associate with vaping are the first reactions to the vapor produced by the body. They are just temporary. Once your body grows accustomed to the substance, the effects no longer occur. They will typically only last a few hours, a day or two at the longest.

The data on chronic disease and vaping

Yes, there are negative side effects concerning chronic disease and using an e-cigarette or vaping products. That being said, these effects are fewer than smoking cigarettes. The majority of people who have chronic diseases and have taken part in a survey have no issues saying their conditions greatly improved after switching to vaping products instead of cigarettes with tobacco. Some of these conditions include diabetes, asthma, lung disease, and hypertension. These results have been confirmed by Mr. Gerry Stimson, a public health scientist.

Many of the negative effects associated with vaping are a result of improper use of the device. A few years ago, it was common to hear incidents of a vaping product exploding when being used. Many of these instances were the result of a person not using the product properly, the way it was intended to be used. Because of this, a user needs to spend time familiarizing themselves with any product being used for the first time.

Also, many of the more severe issues of harm to a person or their health was a result of nicotine being ingested. This can be lethal. This is why your vaporizers need to be kept in a safe place, somewhere a child or pet can not reach them. Anytime there is a spill when replacing the liquid in a vaporizer, it needs to be properly cleaned up, immediately.

Recommended Read: Is Vaping Bad For Your Health?

Minimizing the side effects

There are a few simple steps you can take to avoid the majority of the side effects associated with e-cigarettes and vaping products. We will discuss these one-by-one because some of the effects are experienced for more than one reason.

We’ve already discussed that almost all of the liquids used with these vaporizers have a PG/VG base. While PG is considered by the FDA to be “generally safe,” they have been known to trigger a few allergies with some users. On the other hand, VG is easier on a system because it comes from vegetables. If you are using vaping products and experience allergies, you may want to use a base that is higher VG than PG.

Being sensitive to caffeine

Due to experiencing some minor withdrawals, many users who switch from smoking cigarettes to vaping products tend to drink more caffeinated drinks with high quantities of caffeine or coffee after making the switch. When this is taken to extremes, it can be easy to begin experiencing mood swings and/or anxiety. By paying attention to how much caffeine you consume and gradually cutting back, these effects should go away relatively quickly.

Regardless of how it’s used, a high intake of nicotine can cause someone to become dizzy. If this is something you experience, you’re taking in higher levels of nicotine than your body is able to handle. This can be addressed in two different ways.

The simplest answer would be to use your vaporizer less or not taking in as much vapor. By waiting longer between each puff or inhale of vapor, you give your body more time to balance the nicotine intake. If this has been done and you are still experiencing dizziness, the next suggestion would be switching to a liquid in your vaporizer with a lower nicotine level. Usually, the nicotine level is something you determine when purchasing your liquid.

Before we get started, here, you need to know there’s a huge difference between a canker sore and cold sores. Canker sores are shallow, small blisters that happen inside the mouth, not around your lips. There are several reasons these sores can develop. Stress, acidic and spicy foods, hormone disorders, and vitamin intake being too low. Recently, canker sores have been related to vaping.

However, this has nothing to do with the vapor or liquid being used. More often than not, people who use vaping products will develop canker sores because of a dirty or unclean mouthpiece on the vaporizer. These mouthpieces fill with products and need to be thoroughly cleaned on a regular basis. Most businesses that sell vaping products will have a selection of different cleaning products you can purchase to make sure the mouthpiece you’re using is clean and not creating this issue.

Anytime you are putting a vapor in your mouth there’s going to be dehydration. This can lead to flaky, itchy skin with redness in the area. It also creates a dry throat and mouth. By nature, vapor will draw any molecules of water in or around your mouth. This is something you will be able to feel happening.

Drinking plenty of fluids, especially water, will stop this effect. This is also one of the positive effects people have reported. Among users who naturally have oily skin, users found it easier to keep the skin around their mouth dry when using a vaping product. This being said, it’s still highly recommended to drink plenty of fluids regularly, more than usual, especially when you first begin using these products.

Any time you have a large group of people, there’s going to be differences of opinions and the effects they think can happen. This is no different when it comes to a group of scientists studying research and data on the effects of vaping.

A great example is with Public Health England publishing an independent review stating e-cigarettes are up to 95 percent less harmful than smoking cigarettes containing tobacco. However, a study completed by Harvard concludes because of several dangers associated with vaping products, they can be almost as harmful as smoking cigarettes. These results were largely in part due to the chemicals involved with producing several of the flavors being used in e-cigarettes and vaping products. According to the data, some of these chemicals such as acetone and pentanedione can be very harmful to a person’s lungs.

You have to keep in mind, with the right search, you can find any result you’re looking for, positive or negative. These studies are sponsored by companies and individuals with a specific goal in mind. When enough money is involved, any research or study can be misleading with how the results are presented.

Yes, there is still plenty of research and study that needs to be completed by independent sources. Some of this research simply can’t be completed right now due to time. For instance, because these products have only been on the market since the early 2000s, we’re unable to know the effects of someone who’s used a specific amount of a vapor product for 20 years.

Also, one of the key elements many people fail to realize, many of the harmful side effects haven’t been linked to a specific e-cigarette or vaping product. They are a result of harmful chemicals only found in certain flavors. For now, it’s still a very popular opinion that vaping products are a much safer alternative to smoking cigarettes with tobacco.