Home Vaping Is It Ok To Carry A Vape On A Plane?

Yes, if you are traveling in the United States as a passenger on an airplane, you are allowed to bring a vaping device with you. Mods, e-gigs, and vape pens can either be kept in your pocket throughout the duration of the flight or in a carry-on bag. Even if the device is operated with a lithium battery, this is permitted. If you have any additional pods or a bottle of e-juice, these can also be brought on board with you or kept in luggage that has been checked in underneath the plane.

Keep in mind, many people use these devices for vaping something other than an e-liquid. Any substances that are federally controlled, such as a product made with cannabis, are not allowed on the majority of US flights, regardless of how small the amount is. Just a tip, that includes residue. 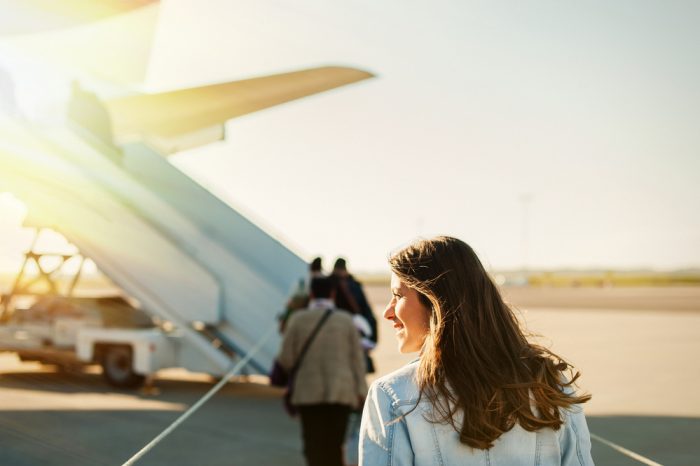 The information we are providing you today will be applied almost everywhere you would travel by plane in the world. For the sake of the article, the regulations we reference have been specifically established by the TSA, Transportation Security Administration. Due to the fact that there could be small variations to vape rules that have been established by the TSA, we recommend that you spend time checking the exact rule of the specific airline you will be traveling with.

Also, if you are traveling outside of the United States to a country you are not familiar with, be sure to research the laws and regulations they have established on vaping and vape products. There are a few countries where vaping is illegal. This is information you will need to know ahead of time.

If you vape, traveling by air isn’t too much of a guessing game. You are permitted to take batteries, e-juice, and a vaping device on a plane. As long as you are willing to cooperate with a few general regulations and are familiar with the procedures, there won’t be any problems.

Flying with a vaping device and the needed batteries

Due to a concern for fire starting in a plane’s cargo area, vape lithium batteries and vaping devices are to be kept on the plane with the passenger. There are no exceptions to this rule whatsoever. It’s the same throughout the world. If an airport baggage handler x-rays your luggage and finds a vaping device or it’s batteries, there is a good chance they will be removed from your property, as well as a mess being made with your belongings.

That’s if you’re lucky. Worst-case scenario, they decide against loading your luggage on the plane. Don’t be this person. Remove all vaping devices and batteries from your luggage before going through the -ray line. Or, simply don’t put them in your luggage, to begin with.

Other tips you should know

To avoid any kind of an accident, be sure they are carried in a plastic case. Usually, you can find these at the same location where the batteries were purchased.

If the mod or vaping device you use operates on external batteries, be sure you take a charger along with you on the trip. Normally, you will pay an arm and a leg for these if you are forced to buy one while you’re waiting at the airport.

For shorter trips, weigh the options on it being smarter to pack a device that is more simple, such as a disposable vape. You won’t need to bring along a charger, there’s no e-juice to pack for the trip, and they can be carried easily.

You may end up with a leak in your device’s fuel tank due to the pressure of the plane’s cabin. Don’t fill these up all the way, if you put any juice in them at all. They can be filled once you arrive wherever it is you’re traveling to.

Tips for traveling with e-juice

When flying, all pastes, gels, liquids, and aerosols have to be in a bottle of 100 mL or smaller. They are required to fit inside a 1-quart plastic bag. This rule was established by the TSA, so it’s normally enforced, regardless of the airline. This will include deodorant, toothpaste, lip balm, shampoo, hair gel, and of course, e-liquid for a vaping device.

If the amount of e-juice you are traveling with is more than what will fit in one of these bags, it has to be packed in luggage that is being checked instead of luggage that is carried on to the plane. If this is the route you are taking, make sure the e-liquid is double bagged. This will make sure you don’t arrive at your final destination with a suitcase full of clothes smelling like your favorite flavor of vaping juice. Don’t worry, there’s not a set size limit for the liquid you pack in luggage that will be checked in. You will also be able to pack additional cartridges and pods.

Because of the cabin pressure, a bottle that is completely full may expand or have the seams of the bottle split. If possible, take bottles that you have already used that aren’t completely filled.

For the duration of your trip, considering using e-juices with a higher nicotine level than you would normally use. By doing this, you won’t use as much of the liquid, meaning you won’t have to bring as much with you.

Be mindful if you are traveling outside of the United States. Countries that are in the European Union, as well as several others, don’t allow more than 20 mg/mL of nicotine. The last thing you want to do is spending time carefully packaging your e-liquids just to have them confiscated at the airport.

Can I fly with a THC or CBD oil vape?

Typically speaking, the same regulations and rules will apply with a cannabis or CBD vaping device as one used for nicotine. There is a huge difference though. Usually, a cannabis product such as a THC oil cartridge or flower isn’t allowed on a plane. It is a huge risk to even make an attempt to pass through security. Just to be straight, no, this article nor this website is suggesting you try to do something that’s not allowed.

How about CBD oil or e-juice?

While some changes were made to the TSA’s policy last year, there are still risks involved attempting to fly with CBD, even if the juice you are carrying is lower than the .3 percent limit on THC. While a bill was passed that makes it legal to manufacture CBD products such as vape oil, the bill doesn’t offer protection to someone in possession of or using a CBD product.

Depending on the state you are in, the laws will vary on CBD. This ranges from states that have no laws on CBD products at all to a person being punished as if they were in possession of any other cannabis product. According to the TSA, they don’t specifically perform searches for illegal drugs, but anything suspicious found during a search is turned over to the security of the specific airport, typically local police.

Unfortunately, arrests are made at airports for CBD possession. More often than not, no one goes to jail or is fined. Still, a lot of time is spent with the CBD product being tested, usually creating a delay in a busy schedule.

It boils down to, yes, there are legal risks involved attempting to take CBD products through security at an airport. The only exception is for individuals with Epidiolex. This drug that is CBD-based was approved in 2018 by the FDA.

Flying with a THC vape cartridge and weed

There is a ton of risk involved when it comes to flying with weed or a THC vape cartridge. In the United States, it is against federal law to use cannabis. Once you have made it through the airport’s security and you are in the plane off the ground, you will be held under federal laws until you have landed at your destination and made it off the plane. This makes the consequences much more severe.

While the TSA isn’t actively doing a drug search, both you and whatever it is that is found during a regular search by the TSA will be turned over to the airport security, again, usually local police. In many states, the local authorities will not care about this. However, in the majority of areas, they do.

There is nothing wrong with traveling with a dry herb vaporizer of a vape pen. That being said, these need to be completely clean of any residue that is left from cannabis. So, if this is something you normally use your vape pen or vaporizer for, isopropyl alcohol and Q-Tips will be needed along with a little elbow grease. They need to be completely clean. Keep in mind, you’re not trying to get them through the inspection of someone who is looking them over. You need to make sure they won’t get the attention of a drug-sniffing dog. If you are not certain you could do this, it’s best to make the trip without them.

In the majority of countries you might be traveling to, the use of marijuana will be against the law. This includes edible forms, concentrate, and oils. If marijuana hasn’t been legalized where you are going, an oil pen or dry herb vaporizer can be considered as contraband. In many areas, the laws against paraphernalia are worse than the laws of marijuana itself. Make sure you know the laws of wherever it is you are traveling to.

Trying to make your flight with a cannabis product is usually more problems than it’s going to be worth. Unless you are in a country such as Canada and the flight stays within the country’s borders, there can be severe consequences if you are caught. Even in the few situations where the authorities make the decision not to arrest you, you could be at risk of losing the items, an uncomfortable search, and an interview that will require a lot of your time. We advise against attempting to travel with a THC vape cartridge or cannabis.

What to expect from security at the airport

In today’s world, many people will take their e-cigarette on the plane with them, so security staff has grown accustomed to seeing them. Don’t get anxious or nervous about trying to pass through a TSA checkpoint or having your vape on the plane.

We have already discussed some of the most significant rules for vaping with the TSA. A 1-quart bag is needed for all liquids that will be in carry on luggage. An electronic device and its batteries have to be taken onto the plane. They have to be able to pass through the security checkpoint.

A vaping device could be used as a threat to personal security, according to the TSA. To demonstrate that it’s not actually an explosive device, you may be asked to turn the device on and off. Because of this, you want to make sure the device is charged before entering the airport. This is uncommon with a pod vape or vape pen, because of how much smaller they are than a mod. Still, because you will not be able to charge them on the plane, it is a good idea to make sure they are charged, anyway.

Last but not least. If you are carrying a coil-building kit, be ready to explain why you have something that may get someone’s attention, such as a spool of wire, wire cutters, and a screwdriver. Put some thought into taking an atomizer with coils that are pre-wrapped for the flight, especially if you are going to another country where vaping is not common and they don’t speak a language you are familiar with.