Home Vaping How Much Nicotine Is In A Cigarette?

Since e-cigarettes and vaping products first hit the market, making the switch to these products from traditional cigarettes has become not only common but a far more popular source of nicotine. Regardless if the switch has been made to decrease the amount of nicotine being used or join in on the vaping trend, there’s a significant question that is beginning to get more and more attention. Just exactly how much does a person have to use an e-cigarette or vape pen to get the nicotine found in one traditional cigarette?

If you are simply trying to compare nicotine levels between cigarettes with tobacco and e-cigs or vaping products, we don’t have a measurement you can consider accurate. Based on the results of study and research, the body’s absorption of nicotine being delivered will differ according to how it is being consumed. With the rest of the article, we will break down the differences between the nicotine used in vaping products and cigarettes, what is meant with the levels of nicotine in an e-liquid, and figuring out exactly what nicotine level is right for you. 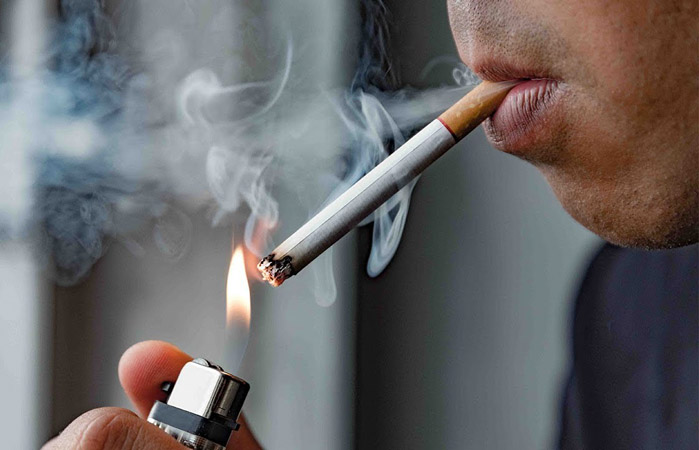 The majority of the time, the nicotine doses within an e-liquid or vaping juice will be measured in Milligrams, labeled as MG. Currently, the standard nicotine level used by the vaping industry is Milligram levels of 0, 3, 6, and 12. If someone who would normally smoke a lot makes the switch to a vaping product or e-cigarette, more often than not, they start with an e-liquid that has a higher level of nicotine, such as six or 12 Milligrams. Also, you can now find products that use nicotine salts. The amount of nicotine found in every one mL of e-juice represents these values. It is not uncommon to find these values being expressed as a percentage on the product’s packaging. For instance:

It is very important that you find the level or percentage of nicotine best for your health. If you aren’t sure the level of nicotine you should be using, it’s highly recommended you start with a lower nicotine level and gradually work your way up until you discover what is best for you.

While the level of nicotine is usually right on the product’s packaging, there is still a lot of difficulty with measuring the specific consumption rate. Another recommendation is to know and be familiar with your habits of smoking. This will help with better tracking your consumption rate. Each person will have a different level of tolerance. Keep in mind, not always, but sometimes there can be nasty side effects with vaping or using an e-cigarette. This is especially true if you are making the switch to vaping products and normally smoke at least a pack of cigarettes a day.

How much nicotine is in a cigarette?

Keeping track of the nicotine being consumed with a traditional cigarette is very difficult. Also, there’s a ton of other harmful risks that need to be considered. The average cigarette will contain around a gram of tobacco. This means, there is about 8mg of nicotine. Due to a few different factors, a smoker seldom absorbs all of the nicotine that is in the cigarette. The level of nicotine will vary in cigarettes based on the brand and type (1). Also, depending on how they smoke, the number of drags, their intensity, ect., the nicotine intake per cigarette will be different from smoker to smoker.

Subsequently, there are also different chemical mixtures found in tobacco other than just nicotine. These chemicals are uniquely blended and play a significant role according to the brand of tobacco. A cigarette will normally range anywhere from 8-20mg. Because all of the nicotine is never absorbed by a smoker, it’s normal to hear the amount is closer to 8mg than 20.

What is better for your health, cigarettes or vaping?

Cigarettes and vape products both have completely different compounds in them. Because of this, they have completely different effects when inhaled. Even if the vape molecules and smoke molecules had the exact same amount or level of nicotine, they will be treated differently by the body. The absorption of smoke is assisted by other chemical compounds found in cigarettes. Because of this, it is impractical to try and make a comparison between the differences of each compound’s nicotine intake.

Trust the signals your body gives you. Once you get to the feeling of a slight buzz from the nicotine, leave your vape or e-cigarette alone for a while. What matters the most is you are not consuming many of the toxins that you will get from a traditional cigarette. There are over four thousand toxins and chemicals in cigarettes that you will not be using with a vape product. Several of these such as carbon monoxide and tar can be extremely harmful to the human body. That being said, comparing the nicotine consumption between the two simply can’t be done. There are far too many variables.

It all boils down to the fact that using an e-cigarette or vaping product is healthier for you due to the simplicity of their components:

How do I pick a nicotine level?

Each smoker will have a different strength of nicotine that’s best for them. We are providing a guideline that is broad with comparisons of different levels of nicotine with cigarettes. This will at least give you a basic idea of where you could start if you plan on making the switch. Yes, the use of e-cigarettes can absorb the same amount of nicotine that comes with smoking traditional, tobacco cigarettes. That being said, there are many other harmful toxins and chemicals in a cigarette that are very hazardous for your health.

Read: How To Pick Right Nicotine Level For Vaping?

Yes, there are vaping juices or e-liquids that have no nicotine whatsoever. These liquids are great for someone wanting to quit using nicotine completely.

If you are someone who doesn’t smoke very much, this is a great nicotine level for you. If you don’t have a strong dependence on nicotine, this level will let you enjoy more of the flavoring of the liquid you vape.

If you smoke non filtered cigarettes or at least a pack of cigarettes a day, you will want to start with a nicotine level higher than 6mg. It highly suggested that as you vape more and more, you gradually lower the nicotine level of the liquid you are using.

There’s a new trend for the vaping community. E-liquids made with what is known as nicotine salts. These are liquids or juices with a higher level of nicotine. If nicotine salts are used, juices may have as much as 50mg of nicotine per milliliter. This isn’t as much as you might be thinking. These particular liquids are used on smaller and much weaker vaping devices. These liquids produce more of what is known as a throat hit, a similar feeling that comes with smoking a traditional cigarette made with tobacco.

The weaker vaping devices vaporize the liquid at a rate much slower rate than the normal e-liquids. When you consider the total nicotine being absorbed, it’s almost the same as using a regular setup that uses more liquid.

Switching to a vape

While there is still more to learn about the effects of using a vape product or e-cigarette, anyone will tell you they are better for your health than smoking traditional cigarettes with tobacco. The majority of people who were once smoking over a pack a day and made the switch to vaping say they could never see themselves going back to cigarettes. So, how about you? Considering making the switch to vaping products that will lead to a healthier life?

Related: Pros and Cons of E-Cigarettes

Is Vaping Bad for Your Heart

Should You Vape Around Your Pets?