Home Use Cases Safe to Use CBD and Antibiotics Together?

There are plenty of people using CBD oil who are quick to tell others it is one of the greatest developments within the medical field over the past 100 years. This is because we are regularly learning of a new benefit that comes with using a CBD product. Before CBD oil was a household name, medicine was revolutionized by antibiotics. They have been used as a great source of caring for one’s health ever since.

This has plenty of people wondering: could using the two of them together be even more beneficial? Or would making this work become a medical nightmare?

CBD oil is being used around the world for a wide range of medical and health conditions. It is used to help consumers get a better night’s sleep, to help with easing pain, controlling inflammation, there are plenty of more reasons why using a CBD product needs to be a part of your daily routine. That being said, if you are someone who is regularly using an antibiotic, is using CBD oil a good idea?

In order to reach an informed decision in regards to the question, you will need to understand the potential disadvantages and advantages of using CBD while taking antibiotics. Keep in mind, this article isn’t intended to replace advice given by a doctor. If you are planning to use a CBD product while taking any antibiotics, you need to have a detailed conversation with your doctor. 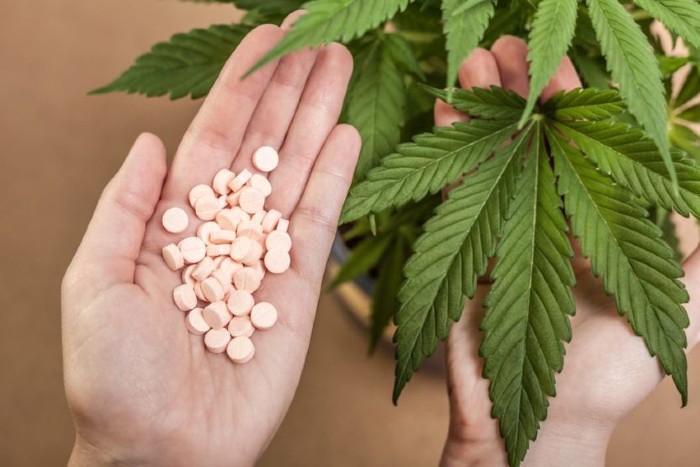 CBD is considered by many to be safe. Most people are easily able to tolerate CBD oil and for most people, there is a very low risk of any negative side effects. But, if CBD oil is combined with specific medications, there is plenty of reason for one to be careful. The way CBD oil relates to the cytochrome P-450 enzyme system is the reason for this.

This system is located in our liver and has over 50 enzymes helping our body with breaking down toxins. There are several medications that can be considered common that this system plays a role in processing into our bodies, but antibiotics such as penicillins are simply inhibitors of the system. Biaxin and erythromycin are actually the specific antibiotics the P-450 system processes.

If either one of these antibiotics is being taken, the time the body needs to process them could be drastically slowed down with the use of CBD oil. This is known as the “grapefruit effect.” This effect will increase the time the active ingredients of the medicine are found in your system. This increases the risk of a negative effect being experienced as the result of using the medication.

This doesn’t exactly mean that it’s not safe to use a CBD product while taking antibiotics. However, it is vital that you understand the effects you could experience combining the two. This is why there needs to be a discussion with your doctor before using CBD oil while taking antibiotics. It may also be beneficial to find a naturopathic doctor specializing in the use of cannabidiol for treating specific medical conditions.

How CBD oil with Antibiotics Can Be Effective

Both antibiotics and CBD oil are used to fight off infection. The manner in which both go about doing so has a lot of significant differences. With antibiotics, there will be a variance in how specific antibiotics bo about fighting infection. You have to keep in mind, the term “antibiotics” covers many different medications. They won’t all act exactly the same. A common function is to target the element of bacterial cells that aren’t regularly found among human cells.

You would be hard-pressed to find a more thorough method to get rid of infection. The slate is wiped clean and all of the body’s bacteria are destroyed, even some bacteria which is considered good. The medication also excludes all bacteria which may be able to resist antibiotics.

There has been study and research completed demonstrating CBD has antimicrobial properties. This makes CBD oil effective as a tool that can be used to fight infections. There is still plenty of research needing to be done as far as how CBD oil does this. Still, science has demonstrated that it does happen. CBD is specifically helpful with attacking the bacteria that are known to resist antibiotics that are more traditional.

There’s a completed study that set out to investigate how CBD and other cannabinoids affect bacteria that are pathogenic. There were six different strains of superbug MRSA tested against several different cannabinoids. There was potent activity demonstrated by each of the cannabinoids. Researchers went as far as to note the activity was “exceptional” against more than one of the strains. To put it simply, they have proven cannabidiol is effective with fighting some of the bacteria strains which have been best known as resisting treatment.

When the correct dosage is found, CBD oil can be used alongside antibiotics to provide a strong, two-sided punch to fight illnesses that have been generated by bacteria. On top of this, after discussing the matter with your doctor, you also have the option to use a CBD product with a high concentration against the injection on its own. This preserves good bacteria throughout the body and helps with reducing the number of bacteria usually able to resist treatment resulting from antibiotics that are used incorrectly.

Possible Side Effects of Using Antibiotics and CBD Oil

We have already brought up the fact that CBD oil is able to increase the amount of time needed for your body to metabolize erythromycin and Biaxin. We also need to mention these antibiotics may be prescribed by themself as well as being in other medicines where antibiotics are mixed. Because of this, if you are using CBD oil, you have to make sure the time is taken to read the labels of each medication you are taking.

Because the body’s process of breaking down these antibiotics is much slower when CBD oil is being used, there is a chance any side effects you may feel will be increased. If clarithromycin and CBD oil are being combined, there is a higher chance of you experiencing side effects such as :

When erythromycin is combined with CBD oil, The chances are increased of you experiencing side effects such as:

CBD for Antibiotic Side Effects

There have been millions of lives saved with antibiotics since the discovery of penicillin back in 1928. That being said, these antibiotics come with plenty of side effects of their own. There is still a lot of research needing to be completed as far as the antimicrobial effects of CBD. Until this is done, CBD is most effective when combined with an antibiotic that might be decreasing their side effects.

Due to CBD oil contains properties that counter the side effects most commonly felt by people using these antibiotics, several people are reporting by combining the two, they don’t feel the negative side effects they would normally get with the antibiotic on its own. While there is still research to do, the number of people saying this shows it needs to be kept in mind.

Which CBD Oils to Use with an Antibiotic

If you are already regularly using a CBD product and a doctor prescribes an antibiotic course, you need to make sure you spend time talking with a medical professional about what the plan should be. After receiving the go-ahead from a doctor or physician, you will want to be careful with the CBD product you choose to use.

Make sure the CBD product you are using has been tested by an independent, third party. This will ensure you are using a top CBD quality brand. The COA or Certificate of Analysis will provide you with the opportunity to see exactly what else is being used in the product. This is especially important when it comes to the product’s safety and potency. You want to find an organic CBD oil product to make sure you get a premium CBD, minus the dangerous herbicides and pesticides.

You will also want to make sure you are mindful of the method in which you are using CBD oil. Depending on the antibiotic and why CBD oil is being taken, it might make more sense to consume the dose as a capsule. Or, you might find you get the best results when drinking CBD oil with a beverage. There isn’t necessarily a right or wrong method of using CBD oil. What matters the most is taking the time to find the method that works best for you.