Post legalization of marijuana, the developed world allows the medical use of marijuana legally. However, conditions that might qualify for its use in treating mental illnesses are highly debated. One condition that has been long discussed and debated regarding the benefits of marijuana is depression. Even after long years of research, however, the answers are all mixed up. 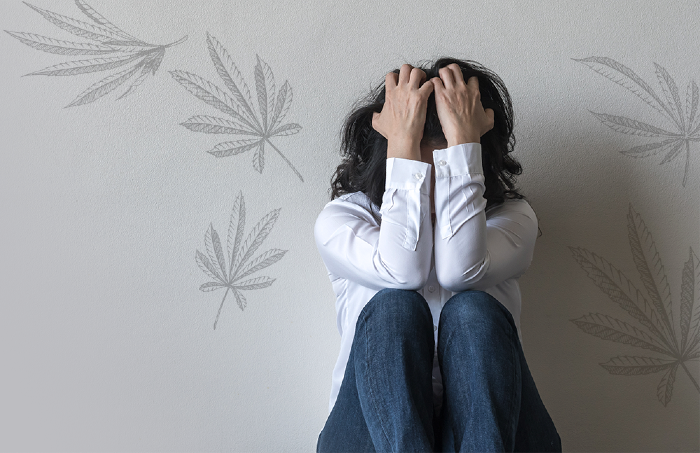 Depression is one of the most common mental illnesses individuals are diagnosed with. So much so that it is often referred to as the ‘common cold’ of mental illnesses. Depression can take many forms – from not being interested in the activities that were once enjoyable, and feeling sad and unable to shake off the sadness or low moods, to having a hopeless outlook on life for long periods of time.

Depression can also look like high levels of fatigue and lack of sleep, becoming more irritable in nature, feeling less control over emotions, and thinking about death. If experienced for a few days or weeks, these emotions might just form the everyday experience of being alive. Events like having a bad work day or going through a breakup can trigger the same emotions. However, there is a difference between being depressed and being unhappy or sad.

What differentiates the two is the length of time they persist in a person. A few days, weeks, or even months, in case of a major family tragedy, might not translate to depression. Regular recurrence of any of the following symptoms – sadness, worthlessness, irritability, fatigue, crying spells, apathy, anxiety, lack of concentration, sleep problems, changes in appetite, and thoughts of suicide – can be classified as an extended period a major depressive disorder.

Major Depressive Disorder or Clinical Depression is complicated because it affects the individual’s ability to conduct various daily activities. It impacts behaviour as well as physical functioning such as sleep, appetite and general mood. Everything from work to school, personal to professional relationships is affected. The lack of functioning can become such that it becomes absolutely necessary to seek professional help.

It is believed that a combination of psychological, social and biological sources are possible causes for the distress. Research studies indicate that changes in functions of the brain are responsible for depression. Some individuals learn to manage depression with psychiatric and psychological treatments. Psychotherapy and medicines are the most popular methods, in addition to changing lifestyle and daily habits.

In some cases, people become so frustrated with their symptoms of depression that they try to self-medicate with marijuana. They use it as a way to escape their symptoms by chasing the feeling of ‘high’ that marijuana gives, as well as the help it provides with sleeping disorders. Medical marijuana is being explored as an additional treatment for MDD. Various research & studies are being conducted to learn its use, benefits and side effects.

Medical Marijuana and its Effects

In the medical world, marijuana is most famously used to relieve anxiety, manage chronic pain, and treat symptoms of vomiting and nausea due to chemotherapy. Various studies showed that a high percent of medical marijuana users felt decreased pain, less anxiety and had a better sleep while using medical marijuana. Controlling spasticity in patients with multiple sclerosis has also been observed in recent times.

Research on the effects of medical marijuana with regards to depression is in its beginning stages. However, researchers have confirmed that in recent evaluation processes, medical marijuana has resulted in improvement in the brain’s function through the restoration of a chemical known as endocannabinoid. As a result, a possible balancing of moods has also been observed in patients with depression, giving hope for the future.

Endocannabinoids, the brain chemicals related to depression, are exclusively being studied by scientists at the Research Institute on Addictions (RIA) at the University at Buffalo. Thi special focus will help in determining the exact impact of the usage of medical marijuana on a depressed mind. Researchers have also started exploring the treatment for chronic stress-related depression using medical marijuana.

Chemical compounds that are naturally produced by the brain play an important role in controlling emotions, cognition, and behavior. Now, the focus is on how much medical marijuana can assist the brain in producing those chemicals so that regular functioning can be restored. These studies and tests have already been performed on animals. It was discovered that the production of endocannabinoids by the brain may be suppressed by chronic stress, which could lead to the behavior of depression.

It was then discovered that normal functions of the brain and normal levels of brain chemicals can be restored by introducing cannabis into the body system. This in turn eases the symptoms of depression. However, since these studies have not been conducted on the human mind yet, extensive research is required to assess the complete disadvantages and benefits of medical marijuana as a possible therapy for humans with depression.

Risks and Side Effects

Research suggests that people who often use marijuana to deal with the crippling effects of depression are at a higher risk of schizophrenia or psychosis. With continued and long term usage, these symptoms can worsen to include delusions and hallucinations. While no clear evidence suggests that depression is caused by consuming marijuana, there are signs of a strong link – a possibility that is corroborated by the fact that non-smokers are less prone to depression than regular and heavy consumers of the drug.

Most of all, what defines the possible side-effects of marijuana is the way it is consumed. Medically, marijuana is available as spray, patches and pills, ongoing research uses traditional methods of smoking and vaporizing. The possibility of getting the benefits of mood-boosting by consuming cannabidiol, a certain extract of marijuana, is being researched currently.

Depending on the severity of depression, every individual’s case is different. Therefore, every person’s treatment remains unique to them. The field of both psychiatry and psychology has grown by leaps and bounds in the past few decades. Now, managing and treating mild to severe depression is quite possible.

While mild cases of depression do not demand usage of drugs, psychosocial treatments are highly recommended. Psychotherapy (also known as “talk therapy”) can significantly improve people with mild depression. One example of a kind of talk therapy is CBT or Cognitive Behavioral Therapy that has proven to be responsive in those with depression.

In the case of moderate to severe cases of depression, psychological treatments such as behavioral or interpersonal psychotherapy are considered to be a decent first step. But these patients often require more help. Doctors and specialists then turn to the use of antidepressants. Tricyclic antidepressants and selective serotonin reuptake inhibitors (SSRIs) are tools used for more severe cases of depression.

As in the case of all medications, antidepressants are to be used with caution. Especially in the case of teenagers and lower age groups, antidepressants are to be used under strict parental supervision only. Since there are potential side effects to these drugs, they should be compulsorily used under proper prescription by a qualified doctor or medical practitioner.

Learning to Cope with Depression

Whether one is already working with a doctor on a treatment plan or trying to cope with depression alone while waiting for treatment, here are a few pointers: